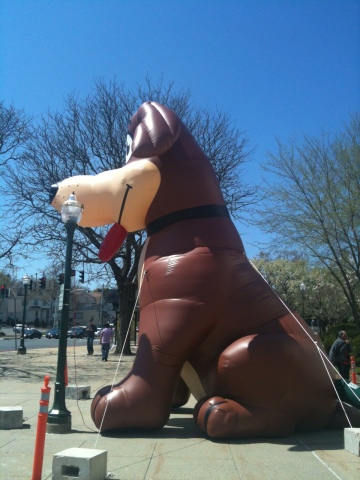 It was another PAW-SOME day at the Best Friends Adoption Event. Lucky and Abby are sleeping in the comfort of their new homes tonight.

Abby and her new dad

Lucky and his forever family

Our pups and volunteers had a great time at the event. We made so many new friends and had the pleasure of seeing lots of wonderful dogs, cats, puppies, kittens and bunnies go to wonderful homes. Wishing everyone love and happiness and we’re looking forward to our next Best Friends Adoption experience.

The sudden passing of her Golden Retriever, Max, in October 2010, was the impetus for Coming Home Rescue volunteer, Susan, to want to honor his memory by volunteering.

“I wanted another dog right away – not that it would take Max’s place – I just wanted to have a dog close to me. My husband did not want another dog ever again since he was in so much pain over Max’s death. I decided to volunteer to do something with and for dogs,” she said. “The Christmas that Max died I watched a video of a pit who had a bad case of mange and was left outside at a shelter. It was so sad. I cried and cried. I needed to help at least one dog to make up for the injustices done to him.” 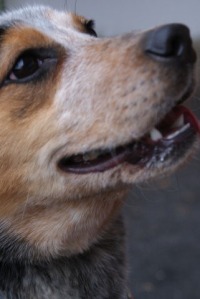 She started volunteering at Noah’s Ark but, due to hip issues, was unable to walk any of the dogs. So she sat with female dogs that had been rescued from puppy mills and had never made human contact.

“I held them every chance I got. I loved the dogs but came away feeling sad and unfulfilled.    There had to be more,” she said. “I saw an ad in a neighborhood newspaper for Coming Home Rescue. They needed help with various tasks. I met with [Founding Member] Charlene over coffee at Panera Bread and started right away.”

She began volunteering in June 2011 and decided to give it a year to get to know the organization, the volunteers and see if it was a good fit for her.

“I love the dogs. And there are few other places where I have met friends with whom I have an immediate bond,” Susan said. “I am very proud to be associated with Coming Home Rescue.  The volunteers are selfless and the more I get to know them, the more I like them.”

Susan began transporting dogs as she owns a Subaru wagon and can carry one large dog, two medium dogs or three small dogs.

“It is very rewarding when a dog I transport to an adoption event gets adopted at that event.”

She also works at adoption events, conducts meet and greet with potential adopters and enjoys helping with the fundraisers. And she has also fostered six dogs for as long as four weeks and as short as overnight.

“My husband and I have been lucky enough to be able to feed and exercise litters of puppies!”

Susan and her husband have written a love letter to each other, every day, for the past sixteen years.

“It’s twenty uninterrupted minutes a day to share our lives with each other.  It might sound hokey but it is very meaningful to us.”

So it’s no wonder that two people that take the time to sit down and share their thoughts with one another have also opened their home to dogs in need. And she would encourage anyone to give it a try.

“If you want to foster but cannot take a dog long term, we always need someone to house a dog overnight at different times for various reasons. But you don’t have to be hands-on. There are many tasks within the rescue that require skills not involving handling the pups. We always need help with fundraising and so much more.”

Her first adoption event with Coming Home Rescue she describes as both educational and poignant. The group had recently rescued eight of twenty-three dogs from an unhealthy living situation.

“We had one of these dogs at the event. She was painfully shy and huddled in a back corner of the run. Marci [another CHR volunteer] sat with me in the run until the dog let us near her without shivering and trying to crawl away. I petted her and coaxed her out of her crate.”

After a bathroom break, Susan put her back in her run. “She went back into her corner. But when I approached her a little later, her tail wagged ever so slightly. Oh My God — that felt rewarding.”

Come out and meet really great dogs looking for a forever home. Here’s where you’ll find us this weekend: 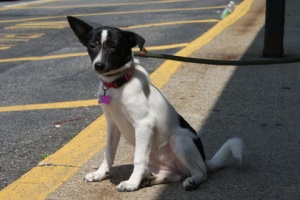 Can’t make it out this weekend? We can always schedule a meet and greet.

Come out and meet the plethora of AMAZING dogs looking for a forever home. Here’s where you’ll find us this weekend:

Can’t make it out this weekend? We can always schedule a meet and greet.